skip to main | skip to sidebar

15 October 2013: Tuesday as dad rests; laxatives at RiteAid (got a card), Bhutanese bball, texts from HCofA in Martinez,

Woke up way too early and stayed up to doodle on the iPhone, moving posts from the "Sent" file to various files on my gMail, most going to "Family", "Parental Care", or "Friends". I have been writing short notes to friends and family ... today I wrote a concerned short letter to Lindsay, mentioning her comments in her 2 letters to her grandparents, in particular her thought that graduate school might not have been the right decision and her worry about lab experiments, just a general sense of unease in her words that made me pause and be concerned about her.
Have been making up to 10 cups of coffee in the Mr. Coffee maker and drinking at least 3 while I read the News Journal. 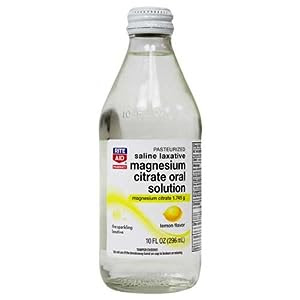 Tried the citrate with 8 oz of water and his hot chocolate sat nearby, still not imbibed. He sipped a little, I finished it (sweet and delicious but needed to be warmer and have whipped cream).

"One thing at a time", he said, "let's see how the magnesia works." The suggestion from me was what Doug had mentioned in his e-mail, a drug, it read:

"Lactulose 15-20 cc po each day works well. But it needs a prescription. Dr. Landis my oncology friend uses it. And dad should stay on the colace twice a day," he wrote. My response, which dad asked about, puzzlingly, was: "Got it. Will mention to dad. He's in a bind, literally and tres uncomfortable."

Have traveled to two stores this morning. RiteAid to get the laxatives, where I got a $1 of MiraLAX by printing a coupon off the web after installing the coupon printing app on the HP desktop computer and signed up for a RiteAid card from thin, blonde Megan (who looked older than her age but quite professional); and then Pathmark where I bought a gallon of whole milk rather than the usual 1/2 and nearly a pound of liverwurst, which I am lovin too much, among a few other items including bananas and bread. Used the scan checkout and bagged my own groceries in two plastic bags. The day is beautiful, temperature mild, just a gorgeous day. At 12:13 p.m., poor Dancer still has not had a walk but that will change posthaste once I get away from this computer screen and enjoy the outdoors. Dad is resting, quietly, on the bed behind me. Wish he'd have a bowel movement.

Funny piece in the NY Times, which I bought to day for the outrageous price of $2.50 but it has the Science Times and this wonderful article of the country Bhutan and the love of the game of basketball, especially by the royalty. 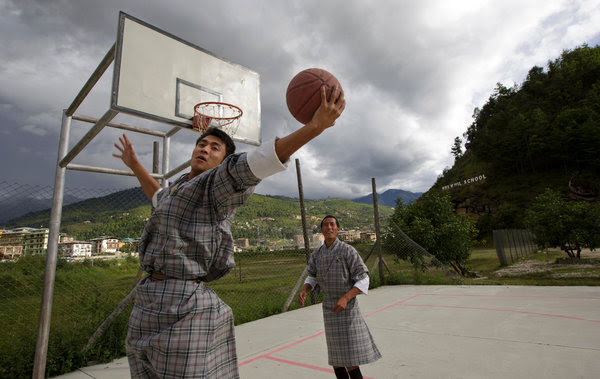 "Students at the Pelkhil School in Thimphu, Bhutan. Few in this nation of 742,000 are taller than 6 feet."Big problem: no height. Few of the Bhutanese are over 6-feet but they think they can beat the Maldives, an island that is sinking due to global warming. If they played at Thimphu at a height of 7,700 feet that might give them an advantage and a first-ever victory on the international sports stage. In the meantime, the royal princess, 23, scores big numbers because there is an inherent fear to foul her. Funny story.

Spoke, via text messaging, with nurses, Sandy Adkins (who I texted, actually) and Mary Kirkland, from Hospice Care of America in Augusta. They suggested to call hospice now but I asked about the above and they suggested dad drink the entire bottle of citrate of magnesia and also take some laxatives, too. Dad is acceding to the suggestion and drinking the rest of the C of M, but he is not going to take anymore laxatives. Stay tuned.

They are both asleep, I think, as Light Classical plays on the HDTV cable TV, one of the high number stations that just play music, this crystal clear October day at 2:16 p.m. or thereabouts.

This is not Light Classical  but an all-classical radio station,  89.7 FM in of all places, North Carolina, where there is another terrific all-classical station out of Davidson College, WDAV, 89.9 FM, in the Charlotte area. Go figure. The state that brought us Jesse Helms, who probably loved classical music -- he was in the band, according to Ray Weldon House, music teacher extraordinaire at Monroe High School.
I'm about to take off for a walk with my ignored pup all morning and into the mid-afternoon. Think I'll head Delcastle way again. Earlier had an exchange with David Aaron Keesee who is airing his emotional issues on FB in a rather open manner. He's conflicted and I worry about him as he has "cut" himself in the past and I just don't know what he'll do. He has some issues.

Before I left, Dad asked for me to check into Highmark Delaware, a Blue Cross Blue Shield of Delaware service or in this case, an onus of faxes being sent to what they saw as a continuing provider and not a retired physician. "Could I stop the faxes from comin'", asked Dad, "there's no phone number." Went to the web site and found one and called and left a message with the Provider Relations Representative, Bobbie Deck (302-421-3497) and also sent an e-mail with the concern (a rep will call back some time during the hours of 2-5 using the home phone number). Hopefully, it will get resolved.

Walk interruptus with an absolute delight of a woman, Eleanor Hyde, in her early 80s, survivor of metastatic breast cancer where she abandoned chemotherapy but told me that when she was on it would go to Howard Johnson's on a Wednesday, when she couldn't eat anything else, and have the New England Clam Chowder and a grilled cheese. Her appetite would get better by Friday. Ernie is still hangin' in there at 91 and appeared and waved from the front doorway, apparently looking for the mail, a daily ritual, said Eleanor. So good to see her on this crystalline blue, mild October day on Nicholby Drive.

Eleanor Hyde petting Dancer on a picture-perfect Tuesday afternoon
on Nicholby Drive on her front lawn.

Started the walk again about 1/2 hour later and decided to shorten it through Milltown Park and the creek. Decided to call and got Allison McKinney on the phone. Had a charming talk. She is well and all is going along at Augusta Gardens. She does get out, less frequently because she needs an attendant to push her wheelchair. Sometimes her daughter fills that role.

Allison's apartment looks out onto this area.

In Sheridan Square, along Nicholby Drive, where Dancer did her duty and I fiddled awhile trying to separate a pickup bag to collect the doo-doo on a pristine, green lawn with a car in the drive and the front door open, I decided to phone William (Bill) "Hercules" Sheridan on his 87th birthday. He answered as I remembered him 40 years ago. Same tone and timbre to his voice. He sounded great and had had lunch with his daughter Cindy to celebrate. It was so good to touch base with him.

Hercules was the son of Jupiter by Alcmena, wife of Amphitryon, king of Thebes.